DR. USMAN IS A STRONG POSITIVE FACE OF MY ADMINISTRATION – GOVERNOR BELLO 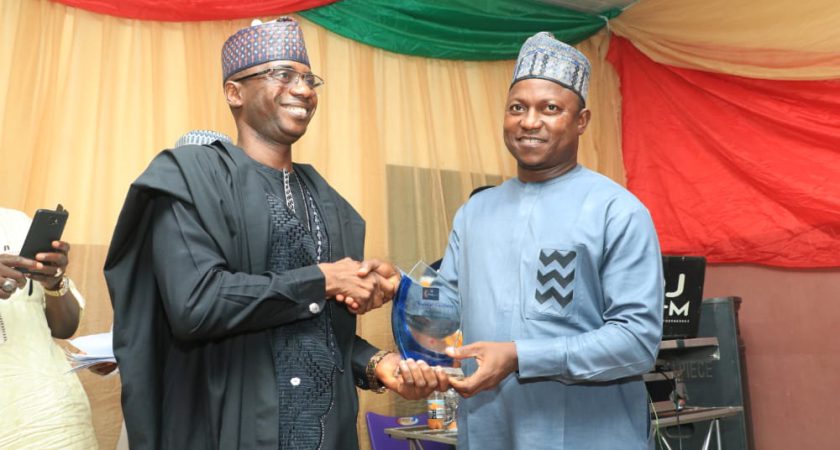 DR. USMAN IS A STRONG POSITIVE FACE OF MY ADMINISTRATION – GOVERNOR BELLO

The Executive Governor of Kogi State, His Excellency, Alhaji Yahaya Adoza Bello, has described the Rector of Kogi State Polytechnic, Dr. Salisu Ogbo Usman as one of the strong positive faces of his administration. This he said, is reflected in his laudable achievements that have redefined academic excellence in the Polytechnic.

Governor Yahaya Bello stated this on Thursday, 25th of August, 2022, at the Lecture and Award Ceremony organized by the by the Nigerian Post in commemoration of Kogi State’s 31st Anniversary with the theme: Kogi at 31; Governance, Leadership Re-Defined, This House Must Not Fall’.

Represented at the Lecture and Award ceremony by his Commissioner for Information and Communication, Honourable Kingsley Fanwo, Governor Bello presented an award of excellence to Dr. Usman on behalf of the Nigerian Post for promoting quality of education and infrastructure at the institution.

He disclosed that the Rector has combined scholarly excellence with street credibility to achieve giant stride in education at the Polytechnic.

Governor Bello added that the Rector has distinguished himself enough to be counted as one of the positive faces of the Government through education and charged other public and political officer holders to emulate Dr. Usman in promoting the New Direction Government.

Editor in Chief of the Nigerian Post, Mr. Abu Michael, in his remark said the theme of the year’s lecture was to review the essence of leadership and governance and the need for a refreshed commitment and unified focus that will further uphold the foundation which the state and country is built upon.

Mr. Michael added that the award was to appreciate the recipients for their individual efforts in raising the standard of Kogi State and Nigeria as a whole as well as using it to charge them to do more and for others to emulate them.

The Rector of Kogi State Polytechnic, Dr. Salisu Ogbo Usman who commended the organizers of the lecture and award programme, appreciated them for finding him worthy of the award, noted that Nigerian Post is a news platform worthy of emulation just as he reiterated the institution’s continued collaboration with the medium.

Speaking on the theme of the event, a Chief Lecturer at the School of General Studies, Kogi State Polytechnic, Mr. Joel Tope Ebenezer emphasized the need for Nigerians to demand for a redefined leadership and governance accompanied with proactiveness in dealing with issues relating to insecurity and poverty among other social and economic challenges confronting the country.

Mr. Ebenezer opined that Nigeria is urgently in need of a leader that will govern with high sense of responsibility, purpose, patriotic, decisive and with a sense of urgency to stir the Nigeria state away from the point of disintegration.

Equally, the Chief of Staff to Kogi State Governor, Pharmacist Abdulkarim Jamiu Asuku in his keynote address charged the people to work in unison and prevent the state from collapse adding the Governor has and will continue to make security of lives and properties a top priority of the New Direction Administration.

Pharmacist Asuku urged the people of Kogi State to sustain the effort of the Governor on strengthening unity and promote peace in the state.

In the same vain, the National Association of Nigerian Students(NANS) has honoured Dr. Usman with Outstanding Leadership Award for his patriotic strides towards educational development, corporate management and entrenchment of constitutional student democracy at the Kogi State Polytechnic.

The award was presented to Dr. Usman at the 40th Anniversary ceremony of NANS held at the International Conference Center, Abuja on Thursday, 25th August, 2022

A member representing Iseyin, Itesiwaju, Kajola and Iwajowa Federal Constituency of Oyo State in the Federal House of Representatives, Honorable Shina Peller who presented the award on behalf of NANS said Dr. Usman has further distinguished himself as one of the motivating vessels for youths and students adding that the award was to appreciate him for building leaders among students with his support and encouragement.

Dr. Usman who was represented by the Acting Dean, Director of Students Services of the Polytechnic, Mr. John Aliyu congratulated the leadership of NANS for steadying the ship of the association for four decades and the success achieved so far promising to always provide opportunities for students to prepare themselves for position of leadership while in school.