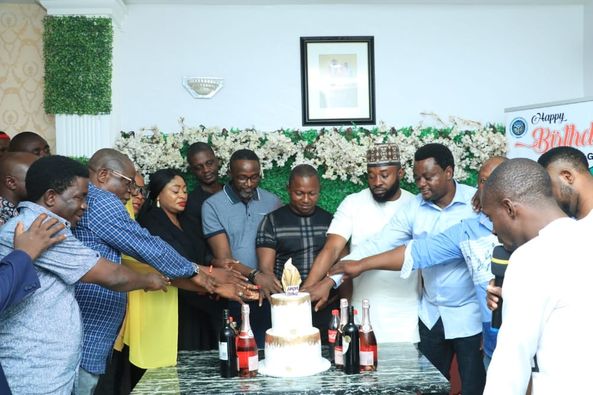 It was moment of praises, appreciation, commendation and prayers at the Kogi State Polytechnic, Lokoja on Tuesday, 26th October, 2021, when friends, relatives, staff and students came to celebrate with the Rector, Dr. Salisu Ogbo Usman on the occasion of his 49th birthday.

The Council Hall of the Polytechnic and the Rector’s Office were beehive of activities with top government functionaries, Principal Officers of the Polytechnic, staff and students associations came to celebrate Dr. Usman.

The Deputy Rector, Dr. Kehinde Felix Lamidi and Registrar, Elder Sunday Ayeetan applauded the Rector for his selflessness and the show of total commitment in conducting the affairs of the institution. They described the Dr. Usman as a leader per excellence and stressed how his good work has given both him and the Polytechnic community a good name.

They showered the Rector with prayers for God’s guidance, wisdom and long life to achieve more and impact more on humanity. The Director of Advancement, Support and Linkages, Dr. Godwin Onamah, expressed delight with Dr. Usman’s laudable achievements in the institution, noting that his dogged supervision has yielded several result under his watch.

The Director, Academic Planning Unit (APU) Mrs. Ruth Haruna said Dr. Usman has impacted many lives positively with his prudent leadership qualities just as she charged other youths to emulate his quality lifestyle.

The Deputy Governor of Kogi State, His Excellency, Chief Edward Onoja in a goodwill described Dr. Usman as an erudite academic, administrator par excellence, solutions-driven, and an irrepressible goal-getter, urging him to focus on this all important assignment given to him by God almighty.

In the same vain, the Chief of Staff to Kogi State Governor, Pharmacist Abdulkarim Jamiu Asuku in a goodwill message described Dr. Usman Ogbo as a rare and exemplary man, who has distinguished himself right from time amongst his peers and a man with a hunger for knowledge, and passionate about the educational growth of the youths and people. The Chief of Staff prayed for God’s wisdom and long life for the celebrant.

They variously described the celebrant as someone that has reinforced their believe in the aphorism that “leadership is not just a position but a call for service and responsibility” as exemplifies since he assumed office as Rector of Kogi State Polytechnic. They used the occasion to pray for Dr. Usman to grow in more health, abundant wisdom and long life which he will continue to use in impacting positively in younger generations.

The Class Representatives Forum, Kogi State Polytechnic Chapter also used the occasion to honor Dr. Usman with an Award of Performance for his effort in bringing about harmonious and peaceful coexistence on campus with his selfless and unprecedented services to humanity.

President of the Forum, Comrade Komolafe David, noted that Kogi State Polytechnic is blessed to have a man of integrity, an epitome of development, a result orientated man, a developer, a builder, a philanthropist, an icon of peace and above all, an indefatigable mentor as Rector of the institution. He reassured him of the Forum’s support to make the institution more admirable.

In his response the celebrant, Dr Salisu Ogbo Usman, commended the Executive Governor of Kogi State, His Excellency, Alhaji Yahaya Adoza Bello for his benevolence and goodwill by considering him worthy to serve under his administration as the Rector of the Polytechnic.

Dr Usman expressed his appreciation to his team of staff who accorded him much respect and members of Rectorate in particular, whose commitment and willingness to work spurred him to work harder.

He also appreciated the well wishers for the prayers, awards and presentations of gifts. He said the awards would spur him to do more and introduce more policies that would further place the Polytechnic on high pedestal. He further urged the gathering to be more committed to their duties so as be relevant in their field of endeavors.

While charging the students to be law-abiding and avoid begging for what is their rights by doing the right thing at the right time, Dr. Usman reiterated the management’s resolve to maintain academic sanity in the Polytechnic.