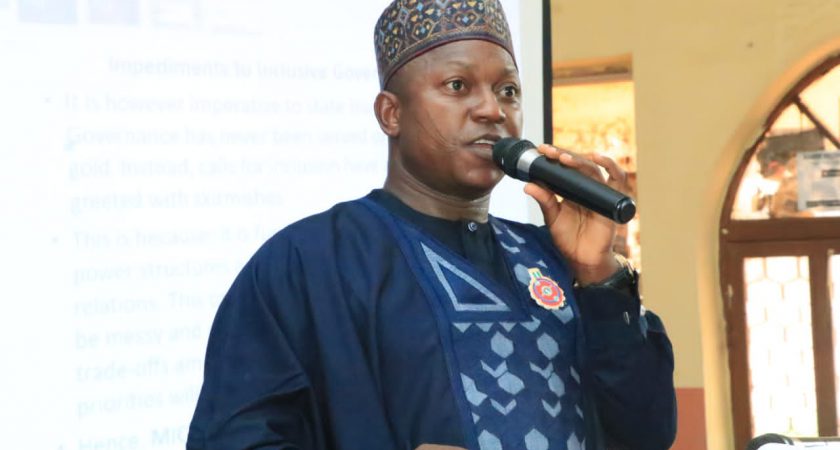 Full implementation of micro-zoning in the distribution of elective and appointive positions has been described as the best tool to achieve inclusive governance in Nigeria.

This was part of recommendations made in a Lecture delivered by the Rector of Kogi State Polytechnic, Dr. Salisu Ogbo Usman at a Public Lecture and Books Presentation organized by the Department of Political Science, Kogi State University, Anyigba held at the Idachaba Lecture Theatre on Tuesday, 7th December, 2021.

In the lecture titled “A Critical Review of Micro-Zoning as a Democratic Tool for Inclusive Governance in Nigeria”, Dr. Usman opined that the political elites in the country have been using micro-zoning to perpetuate their permanent interests to remain in power.

He argued that while political candidates have often emerged from axes which fall within the enclaves of the tribes with more access to power such as the three major tribes in Nigeria (Hausa, Igbo, Yoruba) and the Igala, Ebira and Okun in the case of Kogi State, the power dictators forget that minorities such as the Bassa Nges, Bassa Komus, Kotos, Nupes, Ogoris, Igedes, Ikwere and Gwaris have not either had shots at all or had inadequate shots, and stressed the need to micro-zone elective power positions at the centre, the states, Local Government Areas, senatorial districts and federal and state constituencies in order to accommodate all and sundry.

Dr. Usman who was the Head of the Department of Political Science in the University before his appointment as Rector, said Micro-Zoning would give every component parts of the state an opportunity to access and attain power at one point or the other, reduce violent conflicts that often greet competitive elections, promote peaceful coexistence and engender grassroots development as each federating segment possesses the opportunity to promote policies and programmes that will advance at least the lots of their communities.

The Political Economic expert noted that democratic governance should be anchored on equal opportunities and privileges to every bona fide citizen irrespective of origin.

Dr. Usman recommended for more than one Vice President representing each of the Geo political zones order than the one that produced the elected President and should be rotated among the states in zones and charged political parties to encourage micro zoning in all elective and appointive positions.

“The States, senatorial districts, federal constituencies, LGAs and the wards should be considered in the scheme, the legislators should enact requisite laws to give this principle the necessary legal backing to function and electoral stakeholders such as INEC and Civil Society Organizations, CSOs should embark on massive political education that would aid Nigerians to understand the equity and justice behind this principle,” he said.

Dr. Usman who expressed delight at the level of development achieved by the Department since he left for his present position, promised to support the department with a memorable and indelible project.

The Event was attended by top academics and government officials, including the Vice Chancellor, Kogi State University, Professor Marietu Ohunene Tenuche, Dean, Faculty of Social Sciences, Professor Steve Metiboba, Dr. Gabriel Ottah who is the Special Adviser to Kogi State Governor on Education, Science and Technology, among others.