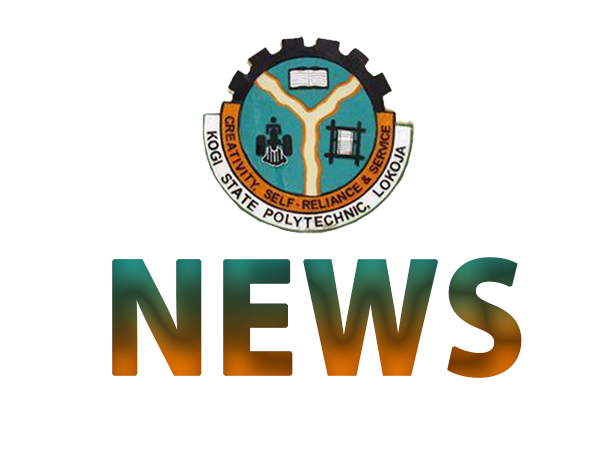 The Institute of Chartered Accountants of Nigeria (ICAN), Lokoja Chapter, has called for collaboration between the body and Kogi State Polytechnic. The call was made when the Chapter of the Institute paid a courtesy visit on the Acting Rector, Dr. S.O. Usman on Thursday, 20th of August.

The team led by a former Bursar of Kogi State University, Dr. Sadiq U. Ozigi fca commended the Acting Rector for the warm reception he accorded them despite his busy schedule, and applauded him for the reforms and transformation recorded     within a short period in office.

He commended the leadership of the Polytechnic for the level of recognition and cooperation so far accorded the Institute and called on the Dr. Usman led Management to strengthen the collaboration.

He specifically stressed that the Institute was ready to give support in the area of training and equipping the Bursary Department.
He also appealed to the leadership of the Polytechnic to take further step by getting Accounting programmes professionally accredited in the institution.

The accreditation of Accounting programmes in tertiary Institutions, he said, is in line with ICAN’s statutory mandate of setting standards and regulating the practice of the Accountancy Profession in Nigeria, initiating quality control and improving the level of pass rate of students in its various accounting examinations and reaffirming the Institute’s commitment to high technical standards.

Among other benefits of Accounting Course Accreditation by ICAN as stressed by Dr Ozigi are Professional Accountancy recognition and credibility, facilitation of choice of academic institutions/tuition houses by students in their quest for accounting knowledge, alignment of the quality of knowledge dissemination by the institutions to global standards and accelerated professional training and qualifying as Chartered Accountant of global standard.

Such benefits, he added, was due to examination levels and subjects exemptions, doggedness and genuine acquisition of knowledge, and provision of supportive infrastructure and facilities by the Institute, including academic buildings, library books, research grants etc.

ICAN, he stressed, rates the University Degree and the Polytechnic Higher National Diploma at par.
He, therefore, encouraged Management to key into the accreditation of Accounting courses.

Dr Ozigi who pointed out that the delegation comprised staff of various tertiary institutions, further called on the Polytechnic to always engage ICAN members whenever there is an opportunity for employment as teaching and non-teaching staff.

The Acting Rector, in his remarks, appreciated the team for the visit and for the honour they accorded him, pointing out that ICAN was the second professional body to pay him courtesy visit since his assumption of duty on 7th April. He said that the Nigerian Society of Engineers was the first.
On collaboration, Dr. Usman said that the Polytechnic should be the one making the appeal to ICAN, and not the other way round because of the numerous benefits of the collaboration to the institution.

On the issue of accreditation and engaging more members of the Institute, he said it was a welcome idea as it comes with serious prestige.
He stressed that as the first alumnus and the youngest ever to be appointed as Rector of the 28 year-old Polytechnic, he knew that there was a lot of burden and high expectations on him.
He pointed out that in his entire working career, he has been in the University and held positions of responsibility that were beyond his level, which invariably prepared him for the present position. “If you are determined and prepared, you will succeed”, he added.

He further stressed that since assumption of office, he had not taken unilateral decisions as over 30 committees had been constituted in line with higher institutions best management practices.
He said that with the team work, cooperation from the members of Staff and the wealth of experience he garnered from the University, he has been able to achieve a lot since assumption of office.
He cited the erection of a befitting Security Building, Health Centre, School Beautification, overhauling and renovation of LT A and LT B, floor overlay and re-fixing of seats at the 500 seat lecture theatre, among others, as results of such collective commitment.

Other achievements recorded as listed by the Acting Rector include New Statement of Result template, review of the Students Handbook and the production of the maiden edition of the Polytechnic Annual Report, which is a major tool of institutional governance.
He added that six projects sponsored by TETFUND were going on simultaneously in the Institution.
On staff, Dr Usman said that the most comprehensive posting in the history of the Polytechnic was embarked upon under his leadership, and added that Management was contemplating serious and rigorous training in the areas of ICT, Security, career and self development for staff.

On welfare, he said he inherited allowances owed staff in Part-Time, School of Management, Applied Science and UTME claims, and all have been paid.
On student welfare, he said money was released to the SUG to purchase vehicles to make their administration easy, and added that consultations were on going for the completion of the stalled students hostel before the end of December.
The high point of the visit was the presentation of souvenir (books for all ICAN courses) to the Polytechnic.